The following is the second submission of an unedited Yeomans Keyline Plow client Field Report as relayed to us by Mr. Dean Yancey and his wife Wanda at - Agrotecy, Lowville, NY.

No-till planting of wheat or corn into pastures is a growing trend in Australia, Europe, and the Mid-West U.S.  In the beginning of the dry season native grasses become dormant and the wheat grows well.  Often herbicides such as gramaxone (herbistat) retard the grasses long enough to establish the cereal crop.  Eventually, the crop will shade out the native competition. Fertilizers are necessary at first because most agricultural land has been depleted of soil organic matter. However, after a few years this higher yielding double crop, no-till practice restores soil health.  Fertilizer and herbicide become less necessary. Colin Seis, Kristy Jones, et al. have developed and promoted this practice for a decade starting in Australia.

Advantages of Pasture Cropping
Planting costs are minimal because little tillage or removal of existing sod is necessary.  Few weeds invade the narrow zones of row crops.  Annuals of most weed species are less active in later summer months when the fast growing row crop is covering the narrow band of tillage.Usually a first cutting of hay is removed or pastured prior to planting.  For our area, we prefer grazing corn for early June no-till planting.  Harvest it nine weeks later at the tassle stage. Without a cob or kernel corn it furnishes low starch high energy forage enabling dairy cows to produce more milk on less concentrate diets.  This is the goal of progressive farmers seeking lower feeding costs and better herd health.
After harvesting the summer row crop, the forage grasses reestablish with no need to plant a cover crop. Sorghum x sudan hybrid, sudan grass, millet, or sweet corn could be planted in the crop rotation.  These crops are rapid humus builders when planted into hayfields.  Each can release hundreds of pounds of sugar per acre to feed soil microbes that rebuild humus.  Healthy soil reduces cost for pest and disease control. The corn population need be only half the normal to cover expenses.  Risk of losing money in poor weather is very low because costs are minimized. A half-crop yield is sufficient to cover harvest costs.
Grazing these crops reduces harvest costs and nutrients are returned without any equipment needed.  Humus builds fastest in this case. Soil structure, water and nutrient holding capacity ,drainage, and tilth are improved. Hilly or stony land even where growing seasons are short can be valuable for pasture cropping. Erosion from minimal tillage on permanent turf is little problem.  We prefer to plant in contour curves around the ridges.  In the keyline method most contours will slope gradually to transfer rainfall to adjacent ridges avoiding transport of soil downhill. We use a Yeoman plow to subsoil, aerate, and plant simultaneously in a keyline contour pattern. Most fertilizer or compost is broadcast before planting. Some starter fertilizer is applied with the Yeoman plow-planter. This plow has wear-resistant shanks and points.  The wear parts are cheaply replaced.  The soil contact parts are aerodynamic in shape and slide through the soil with minimal friction and disturbance of soil structure. We find ten horse power per shank is sufficient unless deep hardpans are being fractured. In fact several horses could pull one shank.  Operating costs (fuel, maintenance, parts, labor) are reasonable.
While planting the shanks are set to desired depth for aeration.  A V-shaped wing knife attached to the rear of a shank is adjusted to plow a foot-wide zone while seed is being dropped ahead of the knife point. The knife slices off roots and rolls back a three inch layer of sod. Germination was great during the drought June 2011.  The plow shanks penetrate bone dry sod easily, unlike conventional no-till planters.  Few machines are required. Grandpa almost had enough horse-drawn implements to do pasture cropping. This method of farming can quickly supply the crop demanded by changing markets.  A hayfield or pasture can be converted to a cereal or vegetable crop, then left alone to revert back to grass as the market demands.  Round baling of Master’s Choice BMR grazing corn can be a challenge.  It dries down slowly.  However, growing grass between the rows simplified harvest.  The grass dries much quicker than green corn stalks.  Cows milk well on the combination.  Harvesting the crop before late fall rains reduces mud problems. Working on sod with dump trucks, round balers, and mid-sized tractors is gentle on the soil and machinery.

Environmentalists support this farming method.  Carbon dioxide from the atmosphere is sequestered as soil organic matter when plant residue and roots are quickly converted into humus by active microbial population in healthy soils.  Erosion is nil while producing grain crops.  Nutrient run-off is avoided protecting aquatic systems. Dependency on imported petroleum is greatly reduced with less need of fuel fertilizer and pesticide.  Organic farmers can use this method with compost only.  No winter cover crop need be plowed into the soil to maintain fertility.  Nature has built the most productive crop land with a commingling of grasses, legumes, and grazing animals. Cereal crops including corn grew throughout the grassland before man’s presence.

Pasture cropping can be challenging where soils are depleted and fertility or rainfall is inadequate for crops like corn. With time, the build-up of humus improves both fertility and water retention.  Is grass a competitor to corn like any weed would be?  No, grass is fed to cattle along with the corn. It is not a weed.  It’s a healthy combination for cattle diets, easy to harvest  for disc mowers, rakes, and round balers.  The corn is planted in tilled shallowly plowed zones of about one foot width and four feet spacing on center.  It takes a few weeks for the grasses to send new roots into the plowed zone. By then the grazing corn has established well.  Pre-starter fertilizer in the corn row helps in the competition.  The corn seems to compete with adjacent corn stalks more than the grass does. In fact, the tallest corn at harvest is found amongst the tallest grass where soil productivity is higher.

Pasture cropping can utilize heavy applications of manure without excessive nutrient buildup and danger of nutrient run-off. Manure can be kept closer to the barn.  Even hilly fields can be utilized.  The aeration while planting improves infiltration of liquid manure.  Pasture cropping methods should be tried for reestablishing alfalfa in hayfields where it has nearly disappeared.  The narrow zone plowing mixes much dirt to three or four inch depth.  This reduces lingering allopathic toxins left by the alfalfa roots.  Seed dropped behind the plow knife should establish nicely on suitable soils for alfalfa.

Other crops of interest for hayfield planting could include oil seed (sunflower, soy bean, canola) teff grass for a summer horse hay market, forage brassicas for increased grazing capacity from May to December; sugar crops, fiber, and textile crops etc.  These experiments should be top priority for us.
Dean Yancey
Lowville, New York
June 4, 2012 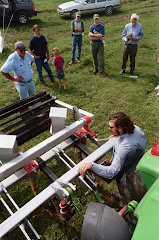